You are here: Home / Events / Operation Allied Effort by Grenny/Ronin 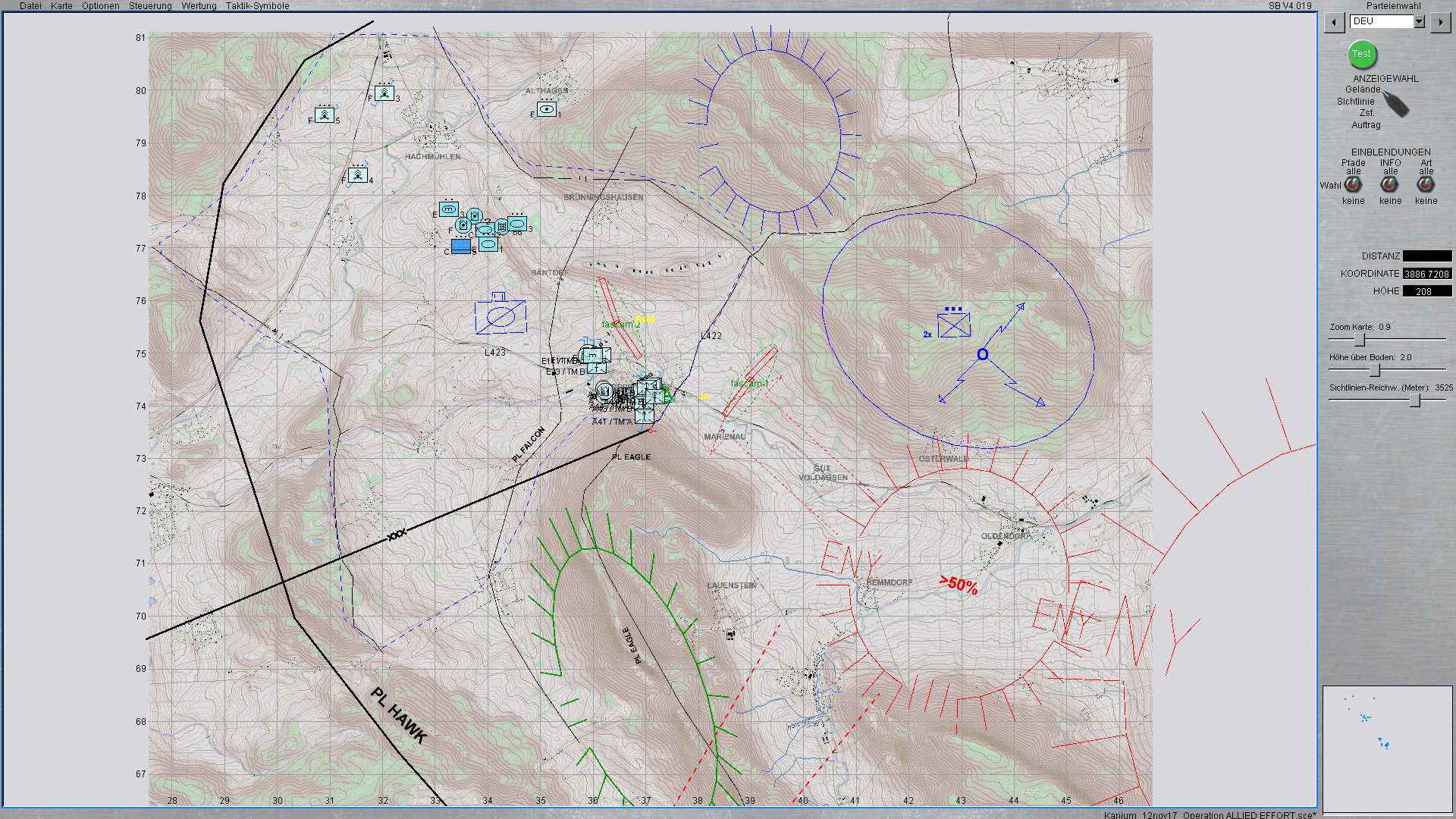 Enemy has been able to identify the seam between US and GE units in the area east of SPRINGE (east of our AOR, not on map)and is attacking along that line
with MechRifle Rgt 13 as the spearhead of the divisonal attack in our BDE sector.
Likely enemy intent is to break trough NATO delay-forces IOT attack the new NATO defence line (PL HAWK) west of HAMELN
The advance of the enemy infantry (MechRifle BN 132 and 133) units is currently halted east of HEMMENDORF, MechRifle BN 131 is engaged with german light Infantry (Jäger) south of SPRINGE, Enemy is down to roughly 50% strength and currently reorganizing.
Recon suggests that the enemy is currently concentrating what he has left in armour (Tank BN 134 + detchments from 131) in the area of OSTERWALD and OLDENDORF.
The ENY commander is likely going for a last ditch effort to break trough, around our left flank, in the area of COPPENBRÜGGE

Our Infantry BN(+) has succesfully delayed the enemy advance along the line…
Currently the BN is conducting a time limited defence on the ridgeline west of HEMMENDORF with the aim a delaying the enemy for another 1,5 hours
to enable finishing of defence preprations a PL HAWK.
Losses have been low, and repeated attacks have been repulsed.
Unit strenght is at 85%, attached Tank company at 100%

Our left neighbor (GE) has been hard pressed my enemy attack, but their infantry has stopped the enemy inside the woodlands south of SPRINGE.
(wooded terrain north-eastern in our map)
But the only armoured reserves left to them. are the remanents of Aufkl. Btl 255 (Armoured Recon BN).
They have been delaying the enemy EAST of SPRINGE, and have be constantly in contact for the last 36 hours, strenght is down to 30% and they’ve lost all senior officers.

Our BN ability to PL EAGLE for the next 1,5 hours, depends on a few dozen tiered consripts, lead by a 2nd Lt….the Col. is not happy with this. Liason with the GE has been establish and a plan made…

US inf BN will detach a QRF in strenght 1 tank company(+), take over command in the sector of GE Recon BN and defend in the area of COPPENBRÜGGE for 2 hours
IOT delay enemy for at least 1,5 hours to enable own defensive preparations at PL HAWK

The Jägers(right neigbor) inform you that they ambushed enemy recon at grid 399 757.
A patrol from C-company(GE) engaged enemy combat recon(3x T-64) from the area of GUT VOLDAGSEN. Enemy withdrew

– assume command of the german units is the new AOR
-conduct a time limited defence between PL EAGLE and FALCON for at least 2 hours
-after that on order, or opportunity disengage form the enemy and conduct POL at PL HAWK
-no enemy forces must cross PL FALCON befor X+90min

Green has 8 movable dugouts for M-60 (they are also very useful for the ITOW).
FASCAM mission 1 OR 2 can be called by the blue side via trigger.
For blue, the Lt has prepared 12-14 Leopard 1 dugouts on the ridgeline north of coppenbrügge. (Not movebale)
An Jäger platoon has taken defensive position in COPPENBRÜGGE (can be player controlled via trigger)
The Engineers can also be controlled via trigger.
The blue side has a trigger to destroy the bridges in coppenbrügge.